So going through some old bits and bobs I found a couple of songs that arent on Spotify and a video of me on Balcony TV from yonks ago. Also a radio session. Here you go –

Although I have been busy creating my empire of children recently I have written some music for a theatre group in London.

Here are some covers in Jonah style I created for Through a Glass Darkly by Rosie Fiore.

And here is a sad song I wrote for Director, Sal Fulcher’s version of Eurydice.

It’s been a while.

Sooz moved to Canada then Australia so she is as far from us as possible, I think she got bored of wotsits and humus.

Lee Danger Cooper went back to wrestling but this time not the physical kind but the metaphysical – he’s wrestling with the problems of the day.

Jonah, from now on referred to as I, moved out of London got married and had children so his once musical fingers are mostly being used to change nappies and press 772 on the remote (CBEEBIES).

However, I have found a few archive pieces and plopped them up on my Soundcloud.

Also some more recent music I have made for more theatre productions.

The album is now up on iTunes and Spotify, Amazon and the like.
CLICK HERE to get your its on it r just type Jonah Maddox into search bars far and wide.
The show was a pleasure to be part of, writing is by far my favourite part of the musical process, and learning the bouzouki was so much fun. It is the best instrument I have ever played. Fylde Archtop if anyone is interested. Handmade in UK. Delicious.
Thanks to all those that came down to the theatre and watched the shows last week, they were very fun, and we sold out of CDs!
Here we are in our snazzy outfits.

If you have come or are coming to any of the performances of What She Will this week and fancy watching the music and some select readings to music again then tickets are now on sale for the gig we will be putting on on July 16th 2015 at the brilliant Slaughtered Lamb in Clerkenwell, London.

Click here for tickets and here for the Slaughtered Lamb site. 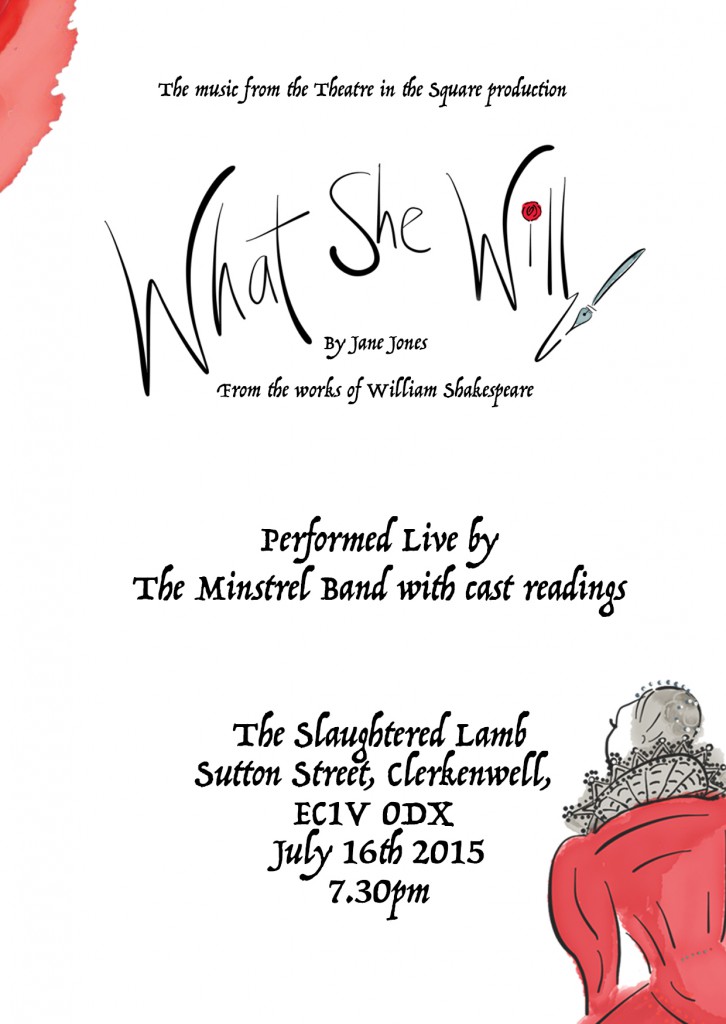 Masters back and it is sounding delightful.
Spotify and iTunes links coming soon 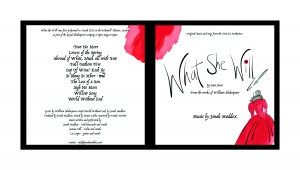 For those of you joining us this week at the Brideswell Theatre in Blackfriars, London, we hope you are looking forward to the performances as much as we are. The set is looking great and the cast are acting great and hopefully we are sounding great.
For those who couldn’t get tickets fret not, at least you will be able to enjoy the music still. Last week myself, Lee and Joanna our fiddle player, recorded all ten songs from the play in a day and a half. It was very tiring, we recorded in East Finchley Methodist church which is an awesome space with beautiful natural reverb. I produced the recording and Simon at Capstone mixed it and Frank at Carvery Cuts mastered. All done in a week.
It will be on sale on CD at the play and I will get it up on Spotify afterwards.

ALSO we will be performing all the songs from the play, interspersed with some choice monologues from the cast, on the 16th July 2015 at The Slaughtered Lamb in Clerkenwell, the same place we sold out many moons ago for my album release. Exciting. Tickets and more to come.

Thanks to all those that bought tickets and see you this week.
J

'What She Will' by Jane Jones. Based on the works of William Shakespeare. from Jonah Maddox on Vimeo.

Hi there people of the world, specifically, you, reading this. I hope these words find you well. I just wanted to let you know that I am not dead, still here, working hard and creating a family, but still here.

I also wanted to tell you that I have been approached to write music for a new Shakespeare play which will be performed in March 2015 at the Brideswell Theatre, Blackfriars, London. I know, I know, Shakepsearre hasn’t had any new plays for ages, but this one is not entirely written by the bard fellow; it has been written and is being directed by Jane Jones and focuses on the importance of the women in Shakepseare’s life, the story is told by Ann Hathaway, Shakespeare’s wife.

So, I am actually in the play, I’m the Minstrel and with bouzouki in tow I will be treading the boards, with accompinement from the ever faithful Lee Danger Cooper, who played with me on my last EP and has been gigging with me ever since.

The music we are creating is in my style, a little more contemporary than Shakespeare would have been used but hopefully he would have approved, purists will be relieved to hear I am not altering his words, having the most famous playwright in history as the lyricist for my new music is quite exciting!

What’s more I will be recording the music as a soundtrack and releasing it some way or another.

Exciting times ahead, but for now, toodle plop.

We got a little mention by the lovely chaps at For Folks Sake this week. They like our EP ‘Three & Four’ yey. Click here to see!

Doing a cover of Falling Slowly from the film Once at a wedding next week so better get back to learning it.