The album launch is nearing we have some new gigs up on the LIVE page.

Hope to see you there.
J:)x

So the album is back with me, mastered and sounding lovely jubbly thanks to the chaps at Finyl Tweek.

I have sorted a launch gig in London – 14th July 2010 at The Slaughtered Lamb in Clerkenwell. Its a nice little venue under a tasty pub and the promoters, electroacoustic club, put on a lot of the best folky stuff in london.

Support comes from my buddy and sometimes banjo player Lloyd Williams under the name Autumn Red, he will be playing on every night of the tour, and also the wonderful Jose Vanders who sung and played piano on one of the songs on the album.

We go from there and play Brighton the next night, and will be recording a live session for Brighton’s Radio reverb in the day. We are playing in another treat of a venue, it used to be the Jooglebery Playhouse but is now the Latest Music Bar.

Then off to Cambridge, the place of my birth, on Sunday 18th to play The Corner House, and then we go down South West, more details shortly coming.

Here’s a little video we made at work the other day when we had to hire in a camera. 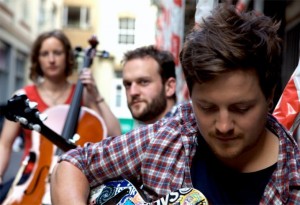