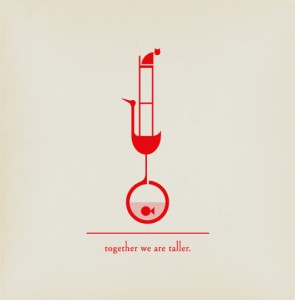 At long last the album is out.

This is what Muso’s Guide say about it –

”There are real tracks of beauty to be found in Together We Are Taller… ‘Happy Places’ where Maddox demonstrates his ability to enchant with voice and instrument in perfect harmony. Meanwhile, ‘Pandas Fighting’ is a track that slowly grows under your skin with its quietly building rhythm.  The track climaxes with the violin playing on heartstrings as Maddox sings “I don’t have far to fall, but I fall hard/And I believe its love every time”. It’s perhaps the most honest and relatable lyrics on the album and consequently makes the track the highlight of the album. Maddox shows in Together We Are Taller that he’s without a doubt a good musician with glimmers of brilliance.”

You can download it digitally on Amazon, Play, HMV, iTunes and Spotify, and loads of other places that I can’t remember!

Physically you can get it from me, cheapo at a gig or online here.

With the physical artwork I couldn’t fit in all the lyrics so I have put them on this site, here.

Also I couldn’t fit this little story in the artwork so thought I would share it on here.

”Well I never! An album! An actual album with my name on it! I think this is the first New Years Resolution I have ever fulfilled…

In 2008 I was living and working in Brighton, happily toiling away my days playing with my band Les Oeufs and introducing my new born cat, Radical, to all the earthly pleasures of a flat above a bookies.  Little did I know the whole credit crunch thing people had been going on about was not a tasty sandwich but a big bastard nightmare that got me, among many others, made redundant.
As you may well know, the best time to be melodramatic and creative is when you’re down, so this is when I started using my new-found time to write some fresh songs.
Although I had loads of songs from the previous 10 or so years of writing for bands, I was beginning to see that I wrote best when it was for me, with no original intention of sharing them. These songs were the basin in which I washed my soul; not for others ears…
This attitude changed when I started working on building sites, my boss was a fellow called Lloyd, and when we realised we had a mutual love for John Martyn we talked almost nothing but music. It transpired Lloyd was recording an album of folky songs with an excellent fiddle player and producer, Simon Walker. As soon as I heard Simon’s recording and fiddle playing on Lloyd’s songs I knew I had to follow suit.

My original plan was to record an album with just vocals, guitar and fiddle but when I met Jose and she kindly lent her brilliant voice and piano skills to the recording of French Place – I began to think differently.  I wondered who else I could get involved to enhance this album and it suddenly dawned on me I was surrounded by talented and generous friends. This is when Together We Are Taller came to life. From pre-production help and instrumentalists to art-workers, press and sales – I have been totally over-whelmed by the way everyone has chipped in and that is why a mere thanks list would not have been enough. Together we have definitely been taller.
To me this album is an accessible and honest account of a 20 something chap or chapette living in these times when suddenly everything becomes a little more apparent; you’re a little bit too broke, a little more ambitious, a little in love, and a little bit scared, but, hopefully, we can see the sunshine through the clouds, and maybe even enjoy the clouds too!” 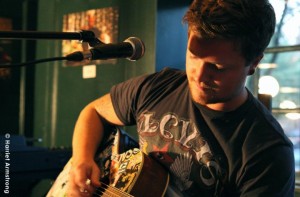 Well the album launched into the stratosphere, well the troposhere, on Wednesday at The Slaughtered Lamb in Clerkenwell. The night was awesome and we managed to sell it out and played to a very supportive and excellent crowd. So thank you all to those who came down.

Jose Vanders was her usual wonderful self and Autumn Red made us in the audience realise how freakin cool a banjo can be . 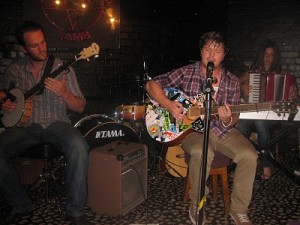 Here is a review of it – Fashion Slant

My little personal challenge for that gig, and in fact every gig that followed, was too see how much sweat I could produce and how many cringingly non-pc things I could say in  the time it takes me to tune a guitar.

My lovely band brought things together beautifully, Sooz wooed everyone with hearty cello parts and then suprised everyone by having a lush and soft Aussie accent when she sang. Jane seemed to pull a new instrument out of her sleeves for every song. And Lee! Oh Lee. He just smiled like a special.

The next day we went to Brighton. Not thinking we hired a 2 seater van. Lee and I sat in our pants, sweating in the pitch black, smashing into instruments and tire arches. If anyone has ever read the Blinding Absence of Light you will know our pain, maybe ours wasn’t quite as bad, we weren’t being politically oppressed and tortured but I think the girls did have evil grins as they drove and heard our screams from the back. Turns out Scrumpy Jack is a good remedy.

Here is Lee a little unbalanced in the van – HAHA

When we eventually got to Brighton, Lee changed his pants and paddled in the sea.

We played in the lovely Latest Music Bar, snapped a string, topped up the sweat quota and saw some old friends and made some new ones along the way. Here we are – 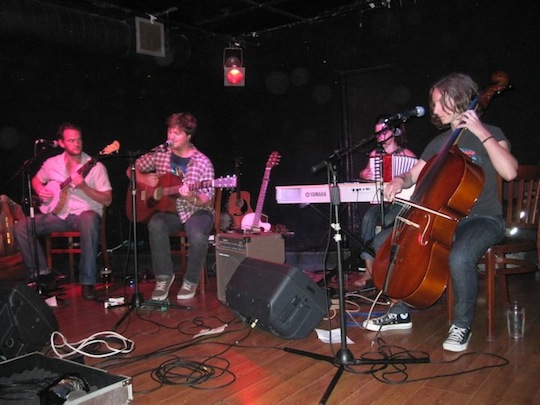 Lee and I managed to sleep on the way back. We were so close. It was unpleasant.

Next stop was my birth place, the place you see Prof Hawking cruising around popping brainy wheelies, where Newton made up some stuff about the forces that govern us, Rupert Brooke was well into the willows and Rory Mcgrath wonders around like a moody ogre – Cambridge. woooo.

I took Lee and Sooz punting in the day to show them how wonderfully wholesome us Cambridge folk are. An evil swan attacked me, Lee shouted ‘we are on boat….you’re not’ at people any moment he wasn’t trying to figure out which way was left and which was right, and Sooz laughed until she looked like she was going to either defecate or die. 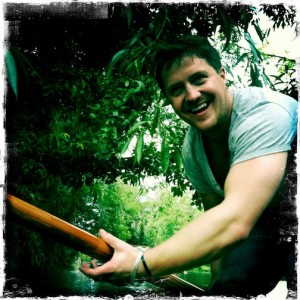 We played in a venue that I had been to a few times in my scaffolder days, it was a bit manky. The audience were loosely based around my family, I embarrassed my mum by mentioning her onstage and we sold some CDs to some nice teeny boppers.

The last in this string of dates was Bristol, we were all excited about this as we know everyone in Bristol is really cool and looks like they are from Skins.

This proved to be wrong.

After a suprisingly comfortable journey down in the death van – Lee and I had put a duvet down and figured lying down was the safest and coolest way to travel – I still had a pool of sweat beneath my lower back and for some reason Lee’s calf was practically spraying sweat, whilst the rest of him remained dry and odd. When we appeared from the back of the van, half naked, sweating and blind to the sudden light exposure it may have looked like we were the bastard offspring of a human/Transformer relationship.

In Bristol it rained. People shouted things at us, we didnt know what they were saying. One cafe woman blamed us that she had to work that day and that she might not be able to get to Womad. She also gave us our smoothies, one red and one yellow but said she didn’t know which was banana and which was strawberry so we had to figure that one out amongst ourselves.

We played a really nice place called the Canteen, they gave us free grub and booze, which toyed with my stomach a bit – another reason the cafe woman may have not been a big fan – but when we played it occured to me that people going out for their dinner in a massive lively canteen aren’t really going to be that bothered about listening to us whimper on. Still we ploughed through and even managed to turn a few heads throughout so all was not lost.

Once we had finished we realised we had no where to sleep, the mornings idea to ‘sleep in a field somewhere, under the stars and that’ seemed less appealing in the ghetto rain so lovely Karen and Andy let us sleep on there floor with there lovely little rat/dog Scampi. Thank you for an unforgettable night Scampi or whoever that was, I couldnt make you out in the dark.

Here is the launch tour gang, Mikey and Lloyd from Autumn Red and then me, Lee, Sooz and Jane, my Milky Puns 🙂 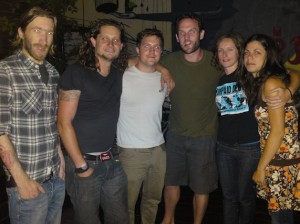 The next day it was back to London for us. Although not a massive tour, we were all freakin knackered, slept for 5 minutes then were up for it all over again. I took the gang to see Lau as an apres launch tour treat and were all blown away. If by any chance you don’t know them check them out!!!

So that’s the end of the launch chapter, ta for being a part of it. Hopefully see you at a gig soon.

This site was nice about us and it is an awesome site, double bonus

Check out Warpaint video too – triple shwing and rad tune.

I am in Teen Today….today. But alas I am no Adam Lambert.

A review of our launch here.

Some nice, some mean…. 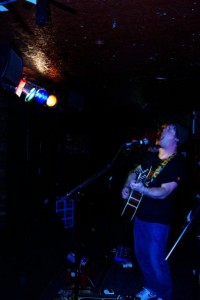 So here is the lovely album cover for my debut album Together We Are Taller.

Designed by the wonderful Ned Miles and I  must say he managed to turn my original idea of a man standing on a cat standing on a bear into something that looks AWESOME, so thanks Ned.

You can purchase it here soon.