Hi chapalatoes and chickaroonis I am currently slobbing around in my pants, sweating and shivering in equal measure, fearing for my life more and more by each passing second. I am sure I just coughed up something vital. I have man flu, and this time it’s serious. ish. possibly.

Like the light at the end of a tunnel though, something cheers me through these dark days: A delightful website called fwdmusic reviewed the gig where we supported Karima Francis and treated our music favourably. If it pleases you then read the aforementioned review here.

For now that is all, a small boast and I’m back to bedfordshire.

I hope this is farewell and not goodbye. (cough, splutter, wheeze) 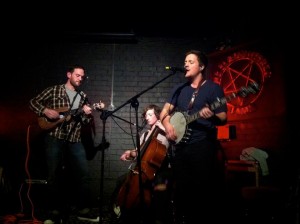 Not only are the delicious flavours of spring and hints of summer floating through the air like sexy little sensory subtleties, but today, here at Mount Jonah; Basecamp Maddox, we are proud to launch into the unsuspecting world our new EP.

Let “Three & Four” penertrate each and every ear you people own; dance in the streets to the sounds of our dolcit tone. Move your bodies in rythmn to Sooz’s cello skills, writhe in time with Lee’s firm round bass and cover yourselves in butter to the tremble of Jonah’s banjo strings.

Anyhoo, I know it’s a bit sudden but I thought I would just whack the new EP up before our gig with Karima Francis on Tues.

Four new tracks played by Lee, Sooz and I…with a bit of added drumming from Ed Downham. thanks Ed.

The EP is called Three & Four (3 friends, 4 songs) and is quite different to my debut album, it is a lot more band based, that is thanks to the excellent Sooz on cello, drums and a bit of violin, and Lee on the double bass and guitar. I still rock the guitar, banjo, harmonica and fiddle and we all sing together in a nice wholesome way. 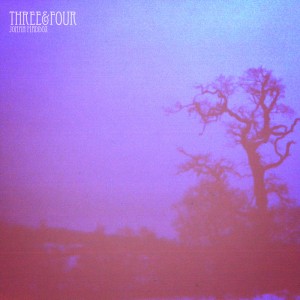 Lee, Sooz and I are excited to announce we are supporting the excellent Karima Francis at the brilliant Slaughtered Lamb for the amazing Pull up the Roots on Tuesday 20th March.

Cheapo tickets have sold out but there are still some cheapo-ish and normal tickets left here – http://www.wegottickets.com/event/157424

Check out Karima’s first album it is beautiful.

We are playing for this event on saturday at 23 Bar, Dalston and there are only 10 tickets left. Possibly 9 nine by the time I finish this post. Arggggh i hear you gargle. Worry not, you can still get em on the door but they are a little more damage to the wallet. Still a BARGAIN though for the awesome bands and the fun times that will be had by all.

We have all been a bit quite of late, I have gone freelance so I have been working like a maniac in fear of becoming homeless, Lee has been working all night because he is a sucker and I think Sooz has been trying to read a children’s book.

Anyhoo, on Sunday we were having a practice and thought it might be nice to film a song on the roof. So we did. Sooz has an awesome roof out of her back door and we even had her friendly neighbours watching and clapping us. Here’s the song, it’s called Somersaults and we have recorded it, along with 3 other tunes and when we get a couple more we will release an new EP.

We have a gig on 22 October at Bar 23 in Dalston for Oxjam which we are really excited about, we did a couple of house party style gigs for Oxjam over the summer and they were brilliant, it’s a fiver in advance, I think will sell out so here is the ticket link. One ticket gets exchanged for a wristband on the day and you can visit a few venues in the area to see different bands. Im going to see my friend play, he’s in a band called The Drop. All info is HERE

Hope to see you all there.

I recently went for an adventure in Dartmoor. I used to study in Exeter and would go into Dartmoor there most weeks, I havnt been back for 7 years so I was excited to see the hills again.

I walked for 3 days and camped wherever I was when it got dark. It sounds romantic and ideal and in many ways it was but I also got ill, scared wet and cold!

This was shot on top of a Tor where i had a nap when the mist came down, not far from Widecombe-In-The-Moor. 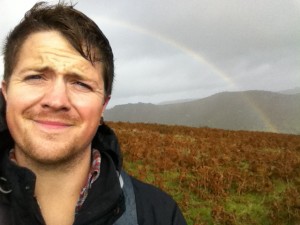 The sun is shining in the blue sky, a blackbird sings good morn and my overgrown and neurotically fenced in back ‘garden’ is partially lit up by warm rays in the north west corner.

This lucid depiction of my habitation can stand as a metaphor for my 2011 so far.

Lee, Susie and I have spent the winter months industriously toiling a new set together, testing out various band names and writing new songs and recording. (So that is the morning part of the metaphor, like the start of the year, yer?)

We played only our second gig of the year last week at Nambucca and showcased our new set. Gone are the days of forlorn silence and welcome are the days of people actually bopping along to the sounds. Yey. (this is like the blackbird singing….ish)

Although we have had quite a few months off,  in terms of gigs (like a neurotically fenced in garden) we wanted to get our new set to the point we were happy with it. Much has changed, Sooz now not only plays cello and sings but on her right foot has a kick drum and strapped to her left leg; some shakers!

(Now for the sun in the garden) So to the future? We are playing as part of the City Showcase festival on May 6th at the Eastpak shop on Carnaby street, 5pm…. Also we will have 4 new songs that will crop up masquerading as singles in the coming months, many more gigs and a tour to go with it, we’re even playing in Poland!

From camp Jonah Maddox, ergh that sound’s narcissistic, I bid you a farewell. X

Oh em geeee. I just ran out to my partially lit garden to scare a cat away, this cat is always there weeing and the like, and my cat, Radical, is a delicate creature and doesn’t appreciate other felines using her garden/toilet as their garden/toilet. On finding this cat aloof to my anger, standing with her back to me, carelessly disregarding my ‘tshhhhtthhh’ noises, I tapped, and i mean tapped, gently and almost tenderly tapped this brutish offender on the tail only to find it’s legs give way beneath it and the whole unit fall to the floor in fear. The, what I now realise to be, DEAF cat ran away with the upmost apologies and politeness. Guilt in-suede and lesson learned. Never creep up on a deaf cat. Someone should remove it’s ears so we all know, or maybe it needs a guide dog. That would be an amusing spectacle.

Who cleans up a guide dogs poo?

The lovely chaps at For Folks Sake who gave my album such a hearty pat on the back have included us in their Best of 2010 feature, this includes a free download of one of my songs and many other great 2010 artists.

Click here to check it, download it, listen to it, dance to it, do a little sick cos you had a fizzy drink before you danced. 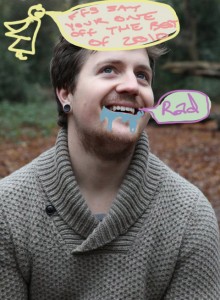 Excellent muso photo lady, Harriet Armstrong, took time out of her busy day shooting Take That and the likes to capture our ugly mugs on digital celluloid.

Lee bought new jeans for the event and I heard he even had a wash but reports are unclear.

We sung a song to a horse  in Epping Forest, we climbed a tree and stood outside the now defunct Walthamstow dog track as people drove past and thought we were c’lebs. 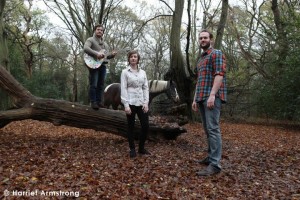 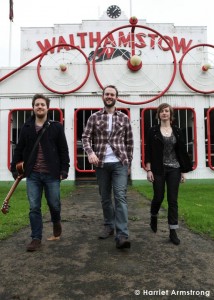 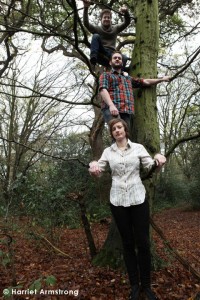 Check out the whole lot here

I love this website, For Folks Sake and was waiting with bated breath for my review of the album.

Here it is folks, and they like the album which is very exciting. 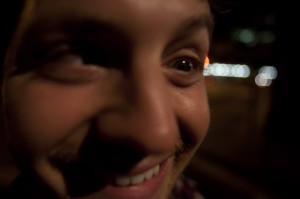